At the USENIX Security conference this past August, Cao et al. presented a paper entitled, "Off-Path TCP Exploits: Global Rate Limit Considered Dangerous" [1]. The paper shows how a recent addendum to the TCP protocol, which was faithfully implemented in the Linux kernel from 3.6 onwards (circa 2012), leads to a pretty significant off-path attack on an ongoing TCP connection. The attack allows one to identify if two hosts are communicating, learn the ongoing sequence number in use, and then reset or inject data into an ongoing connection. Ouch.

In this post I'll present a high-level overview of the attack and then discuss what I believe to be the core problem with the protocol.

RFC 5961 adds mitigations against what are known as blind attacks. Blind attacks can seek to reset an ongoing connection or inject data into a connection. There are two ways to carry out the blind reset attack. First, an adversary can send a packet with the SYN bit prematurely set. Pre-5961, the connection would be immediately reset if the sequence number in the SYN packet was deemed valid by the receiver. Otherwise, the receiver would respond with an ACK packet. Post-5961, the receiver will challenge this SYN packet by sending a response with the ACK bit set. Upon receipt, a valid sender will then respond with a packet that carries the RST bit and the correct sequence number. Thus, if the original SYN packet was spoofed, i.e., its source address was forged, then the connection will not be closed.

To blindly inject data, an adversary can forge malicious data packets with in-window sequence numbers. By virtue of the SACK mechanism of TCP, these would be accepted without any further checks. The problem here was that the window of valid packets was huge -- basically half of the sequence number space. Post-5961, the in-window ACK space was trimmed down to cover the range between (a) the current unacknowledged number (UNA) minus the maximum window size (MAX.WND) and (b) the next expected sequence number (NXT). Anything less than this range, i.e., less than the maximum window size, fell in yet another challenge ACK space. This is shown pictorially below. 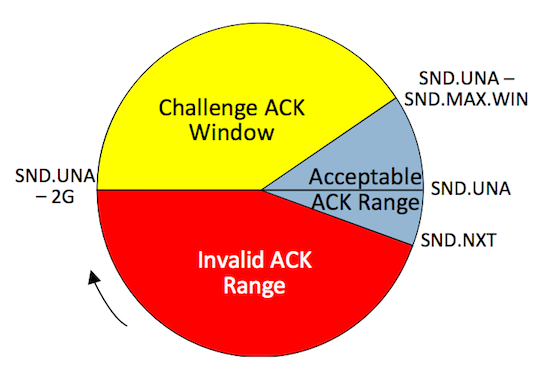 The remedies proposed in RFC 5961 may seem intuitively correct. However, challenge ACKs are not cheap to send. They require additional network bandwidth and network cycles. Therefore, RFC 5961 also suggests to throttle the rate at which they are sent. Specifically, it recommends that implementations SHOULD throttle to "be conservative." The Linux kernel implementation of this throttling mechanism works by using a shared counter (initialized to 100) for the number of challenge ACKs sent across all TCP connections. This is the side channel used to exploit the off path attacks.

(For those interested, check sysctl to learn more about the configured value on your Linux box.)

The attack proceeds in phases. Given an off-path attack with no knowledge about whether a server and victim client are engaged in an ongoing TCP connection, the goal is to determine (1) whether the client and server are communicating, (2) the sequence number (window) of the stream, and (3) the ACK number of the stream. This is all that's needed to reset a connection or inject data. The adversary is assumed to have an active TCP connection to the target server. This connection is used to send non-spoofed packets to the server to modify the state of the shared challenge ACK counter. Each step of this attack is shown pictorially at the end of this section.

The ACK number test is similar to the sequence number test except that the adversary first sends a spoofed ACK packet to the server instead of a RST packet. It then reads the shared counter by the non-spoofed RST packets to learn if its guessed ACK number was correct.

The authors claim that the shared counter side channel is the root of the vulnerability. Thus, to remove it, simply use per-connection throttling. However, as the number of connections increases on a system without bound, the number of challenge ACKs generated also increases. This could have disasterous consequences on a server. Therefore, they recommend adding noise to the throttling mechanism. Basically, instead of using a constant of 100 for the shared counter value, that this varies over time. This will effectively confuse the adversary in their test searches. In fact, the 4.7 upstream Linux kernel will randomize the maximum number of challenge ACKs sent per second. It will also randomly throttle challenge ACKs on a per-socket basis.

In theory this would work. However, I don't think it's addressing the core problem. These off-path attacks are possible because it's trivial for one to learn the connection information for a TCP stream. But what if the attacker's job of searching the sequence space was not a trivial binary search? What if, for example, the sequence number in a packet was computed using a one-way function based on a counter and secret that only the two communicating parties knew? This would effectively make the search space exponentially huge and render these off-path attacks useless. However, it would likely cause problems for middleboxes and proxies. Still, I think it's an idea worth considering. I'm working on some code that will explore this right now. I hope to write about it soon.